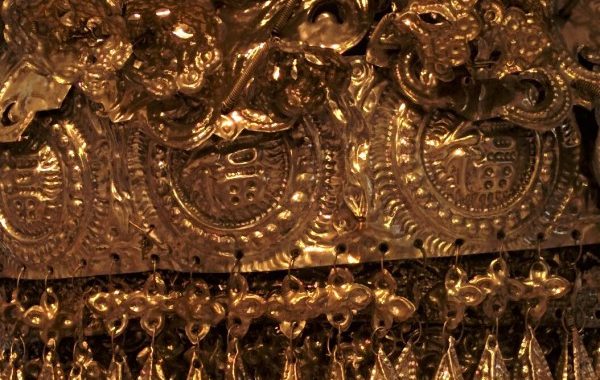 I went to visit the new Exhibition at Textile Research Center -Leiden “Decorated with Gold and Silver”. I recommend to visit it and to dive into the fascinating world of Silver and Gold embroidery and garment accessories. Here you can see an interesting video about this exhibition where the director of  TRC-Leiden, Gillian Volgelsang-Eastwood explains a few of the pieces showcased in the exhibition.

To design the Chinese kissing couple I’ve been focused on the Cheongsam or Qi-Pao as the traditional Chinese garment. In this exhibition I saw 3 beautiful Chinese head coverings which belong to other type of traditional garments. Finding out about their  origin has made me more curious about the origin of Chinese people living in the Netherlands.

China is recognized as a united multi-national state, formed of 56 ethnic groups starting with 91.59% are Han Chinese and 8.41% are the 55 ethnic groups (National Chinese Population Census of 2000). According to the Dutch Central Statistics Bureau (CBS/2012), there are in  The Netherlands 80,198  Chinese from which approximately 52,000 have been born in China, Hong Kong, Macao and Taiwan. The other 28,000 are second generation.

The three head coverings exhibited at TRC-Leiden are part of traditional garments belonging to the Han and Miao Chinese ethnic groups. 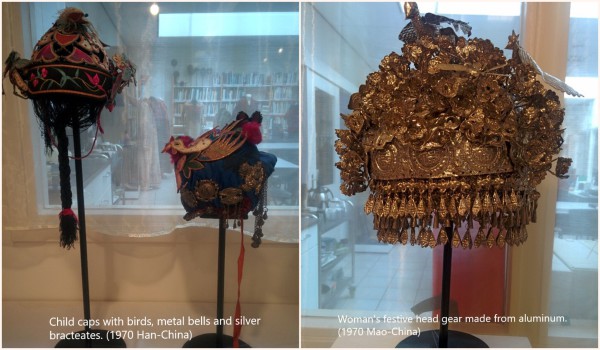 The first two pieces are made of woven and printed materials. They are decorated with applied objects such as beads, shells, braids, coins, chains and ribbons. They are very elaborate pieces, all made of cloth butterflies and birds and metal decorations which have been stitched on to the caps. These hats are associated with Han girls the ethnic group that forms the majority of mainland China.

The third head dress is made of aluminum and it is worn by Miao Chinese women. Miao Chinese is the largest of the minority groups in China.  Travel China Guide has published this video where you can see part of the lifestyle of Miao people and you can also see some women wearing this festive head covering.

This has been my learning trip today, from Amstelveen to Leiden, from Leiden to China and back to Holland. A small country made from different cultures.

To Kiss or Not To Kiss at the Dutch Design Week 2017, An unexpected and rewarding impact.

Dutch Design Week is busy. We all know that. But that we would be stormed…

October 4th was the opening of the Culture Cult Exhibition. It is wonderfully organized by…

First out of twenty

During the past few weeks, I’ve invested quite some hours in detailing, sanding and painting…