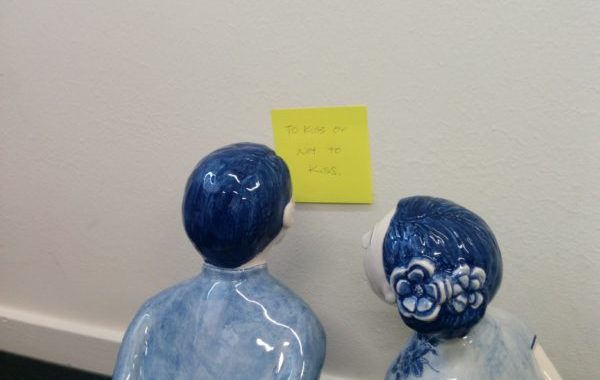 It has been a while since the last time I posted something about this project. Apart from being busy with work and my own education, my approach to this project has been to take it one step at a time and let the project lead me towards its next steps.

It may sound a bit irrational but I am exploring a different approach which lets the project build up its own stories.

In my last post I tell about the challenge of making the molds myself. After having the plaster molds ready, I took them to Piet van der Sluis from Dutch Molds to have them slip casted and fired. When they were ready I came over to his studio to correct them, clean them and leave them ready for firing. The result was 3 Chinese kissing couples. I really like how they looked all white without any glazing.

I enjoy the thinking process needed to understand the complexity of making plaster molds. “If I do this, then that could happen. Do I want that?” Is it possible to have 100% control of the result? Not really. I appreciate the uncertainty of the process.

The next step was to have them decorated and glazed in Delft Blue. At Montagne Aardewerkfabriek they took care of this with high quality results. To achieve this I made some sketches of possible designs using pictures of the pieces and used the Fresh Paint App to provide them with detailed designs.  After three weeks the pieces were ready. I am very satisfied with the end result. As every prototype shows, there is still room for improvement but it is quite good to communicate the concept behind the To Kiss or Not to Kiss souvenir.

After doing some exploration about the Chinese traditional garments and having some conversations with Chinese or people of Chinese descent we concluded that the best option for the Chinese kissing couple would be to use the garment that most people outside of China would recognize as Chinese: The Qipao or Cheongsam for women and the Changsan for men.

I chose to use the Peony flower as decoration for the female figurine. In Chinese culture this flower is a symbol for loyalty, eternal beauty and longevity.

“The peony has a long and fabled history in China. One legend describes how Wu Zetian, the only Empress (690 -705 AD) of the Tang Dynasty, was drinking one day during the winter in the Imperial Flower Garden.  While admiring the snow, she was also captivated by the fragrance of the winter flowers that were in bloom.  She wrote a poem and sent it to the god in charge of flowers.  The poem said that she would visit the garden again the next day and that all the flowers were to bloom and not wait until spring.  The next morning hundreds of flowers were in bloom.  But, the peony stubbornly disobeyed the order and refused to bloom.  The Empress was enraged and gave orders that all the peonies in the capital city of Chang’an were to be banished.  Those tree peonies that refused were burned to the ground.
From that time on, the peony gained a reputation for resistance and rebellion. As time passed, however, the peony’s reputation softened and gradually changed to one symbolizing longevity, loyalty, happiness and eternal beauty.”

I have  been working on the Chinese female. The shape is almost ready and I…

While the Chinese kissing couple was in the glazing process, I thought it would be…

Next to the production of models, I’ve been doing research for the content of the…